When I was 27 I was working in SF at UC Medical Center and living in Half Moon Bay.  Outwardly things were great. Inwardly I was desperate for meaning in my life.  I longed to know the God of my Catholic upbringing. I longed to experience the Divine Love that I constantly read about in the lives of the saints. Praying all day every day for guidance, I felt alone in this world.

One day Divine Mother finally answered my prayer through a friend. She told me that a disciple of a God Realized Master, Swami Kriyananda was 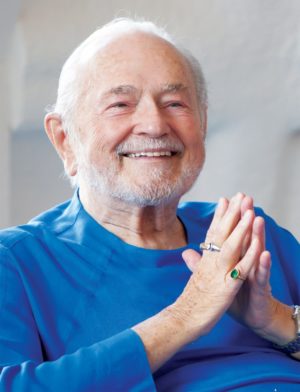 speaking at the bookstore in Palo Alto on El Camino Blvd. Not knowing what any of that meant, but thinking this may be some sort of guidance, I arrived in the evening for Swamiji’s scheduled talk. The door was closed so I knocked and I was welcomed by the brightest, most sincere souls I had ever met.  There was magical sweet singing and Swamiji’s talk was so devotional, filled with Divine Love. My heart had been touched like never before. I left the event that night knowing that I had found the spiritual home for which I had been yearning.

In a few months I quit my job, moved into the ashram in Atherton on Park Lane and started volunteering at the bookstore,  taking every class I could and attending all the meditations, satsangs, and events.  I was able to see Swamiji close up as he often stopped at the Ashram on his way back from his ceaseless travels. Never had I met a soul of his caliber and I was humbled to even be in the same room with him.  After about three or four months, the Spiritual Leader of the Atherton Center at the time, suggested that I go to the village and receive Kriya Initiation from Swamiji, as he was going to offer it on the upcoming weekend.

I was thrilled and felt so blessed and joyfuly began preparing to go up to Ananda for the first time. A couple of days later, the day before my departure, I was told that Swamiji was not going to give the Kriya Initiation as he was ill and that someone named Jyotish would give it in his place.  I asked if I should wait for Swamiji to give me Kriya or should I go now.  He encouraged me to go and so I left for Ananda .

Well, I left for Ananda in the late morning on the day of the Kriya and it was pouring rain.  As I got near to the village I got completely lost and drove around for hours (no IPhone) and it was getting darker and darker. I finally stopped by the side of the road and prayed tearfully to Master, “If you want me to get Kriya, then, please, you have to get me there!”  Within five minutes, an Ananda person miraculously found me and helped me find my way to the tiny trailor I was to stay in at Ayodhya.  He lent me a weak flashlight and gave me directions to what is now called the Crystal Hermitage Guesthouse.  I quickly changed into my white outfit, put on my knee high rubber boots and my new 40lb army navy surplus jacket, got my flower and donation and fruit and literally slid down the muddy hill praying all the way that I would still have a white outfit at the end.

Drenched and disheveled and sort of discouraged, I knocked at the door of the Guesthouse and for the second time in my life a door opened and I was welcomed by an angel.  She was warm, kind and familiar and I knew then that in the middle of this dark rainy forest, I had once again found my spiritual 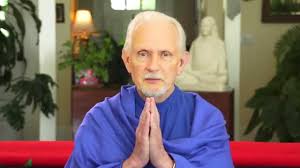 I will always remember this night of nights.  The room was simple with a sweet vibration and glowing with soft candle light.  Beautiful flowers adorned the altar  and the pictures of our Gurus shone with an astral luminescence.

As I recall, there were about  a dozen of us taking Kriya that evening, meditating quietly as we waited for Jyotish to begin the ceremony. The rain was still pouring outside but inside we were in heaven.  The Initiation was profoundly deep and inspiring and when I went to receive my blessing my heart was pounding.  I can still feel the touch of Master through Jyotish as he blessed me on the spiritual eye and when I returned to my chair I was overwhelmed with gratitude and love.  I think that this Kriya  Initiation was Nayaswami Jyotish’s first and  I will always hold this memory as one of the most precious moments of my life.